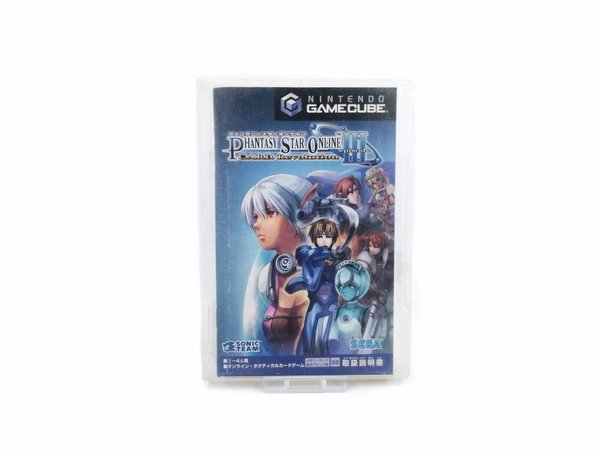 Phantasy Star Online Episode III continues Sega's role-playing game series that chronicles the exploits of the Hunters, a team of battle-hardened soldiers who explore the hostile planet of Ragol in search of fame and fortune. Unlike the previous two titles in the series, combat is now a more strategic affair with the introduction of cards in lieu of weapons. Using a turn-based system, players move their 3D characters into position on the battlefield, work with teammates to develop a strategy, and then implement the plan by playing cards designed to cause as much harm to the opposition as possible.

By exploring the planet, battling enemies, and gaining experience over time, players can acquire new types of cards and build more powerful and balanced decks. Weapons, items, and even monsters can be used in battle if players collect the specific cards needed to equip or to summon them in combat. Up to four players can compete against one another offline in two opposing teams, or players can take the battle online and chat with Hunters from Phantasy Star Online: Episode I & II in the lobby.